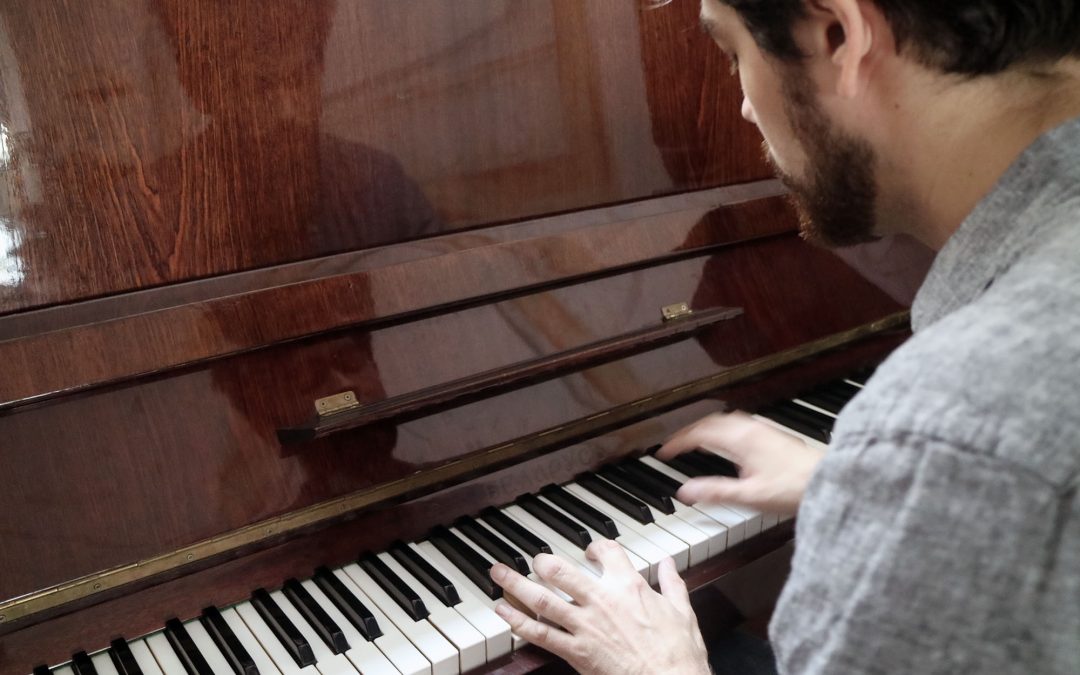 I like to call myself a musician. I don’t only do film scores, but it’s just one of the things that brings in the most money for now, and it’s not even a lot of money. We’re not talking about some crazy Hollywood shit, but we’re talking mostly Slovenian independent movies.
A girl who I was dating during my first year in Ljubljana had a friend who was filming a movie. It was really low-budget stuff and since I’d been studying sound engineering he asked me if I could come and record sound. Of course, I accepted his invitation. Even though it was independent, low-budget, and very amateur, it was a film set. That was completely new and different for me so it was cool.

After I finished, the guy asked me “so, do you want to do the score for the movie too..?”

I’d never done anything like that before. My first reaction was to be as excited as shit. I mean, holy fuck! I was in my twenties, I’d never studied music, and all of a sudden I had been given the opportunity to write film score.

My next emotion was just plain fear. I was fucking scared! I’m not a professional so I had no idea how it was going to go!

“It was a magical first time, and I just fell in love.”

I really wasn’t sure of myself back then, so my heart was going crazy. For fourteen days, I was under so much stress. I kept questioning myself: “who am I to be sending my scores to this academic who is probably at home laughing at this shit?”

To which he replied “No it’s fine. I’m not actually changing much at all. We just need to make it readable for the musicians.” 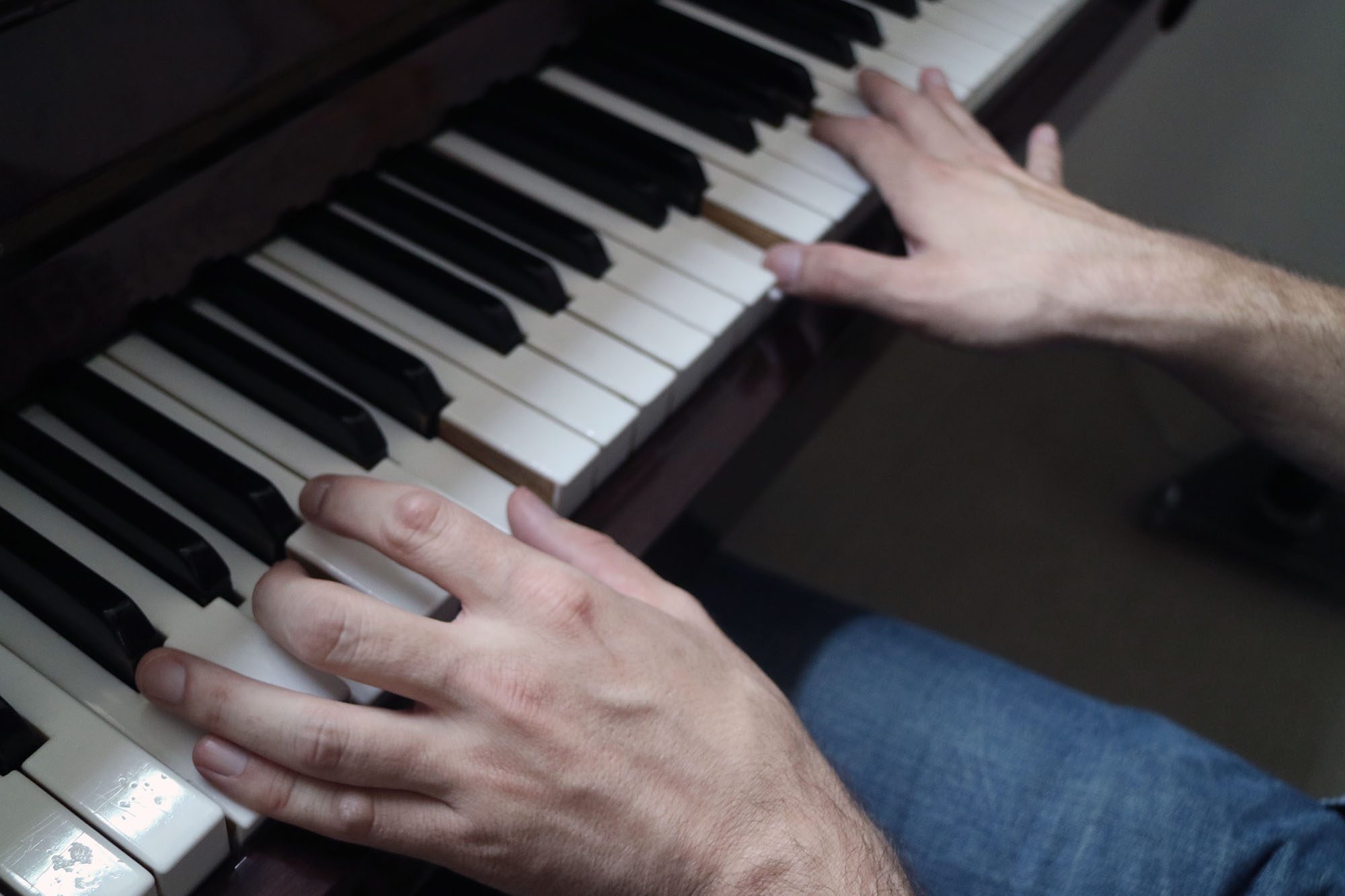 The day of recording was magical. We went to record it in a school where they had a gigantic hall. It was a very amateur, basic way of recording. The film was on the screen, the orchestra were there, and there was one guy conducting the whole thing.

The feeling for me was simply “Holy Shit! Did I just write that?”

After the very last piece was recorded, the conductor looked back to me and the director as if to ask “Was that okay, or shall we go again?” I also glanced at the director, who looked emotionally moved by the entire experience. It was then, when I realised I’d never had this much power before, to control people’s emotions with the work that I’m doing.

From that first project onwards, I decided that I should probably focus on learning more music theory. I come from a fairly unmusical family, and have never been to musical school. So I just got myself loads of books, and for one or two years I just studied it by myself. I would ask people a million questions about how things were done and what things mean. This helped me to realise how things were linked. It helped me to understand better which scales worked together, and come up with these things quicker, which is really important for film score because you always have a limited amount of time to work on it…

How To Write Film Score 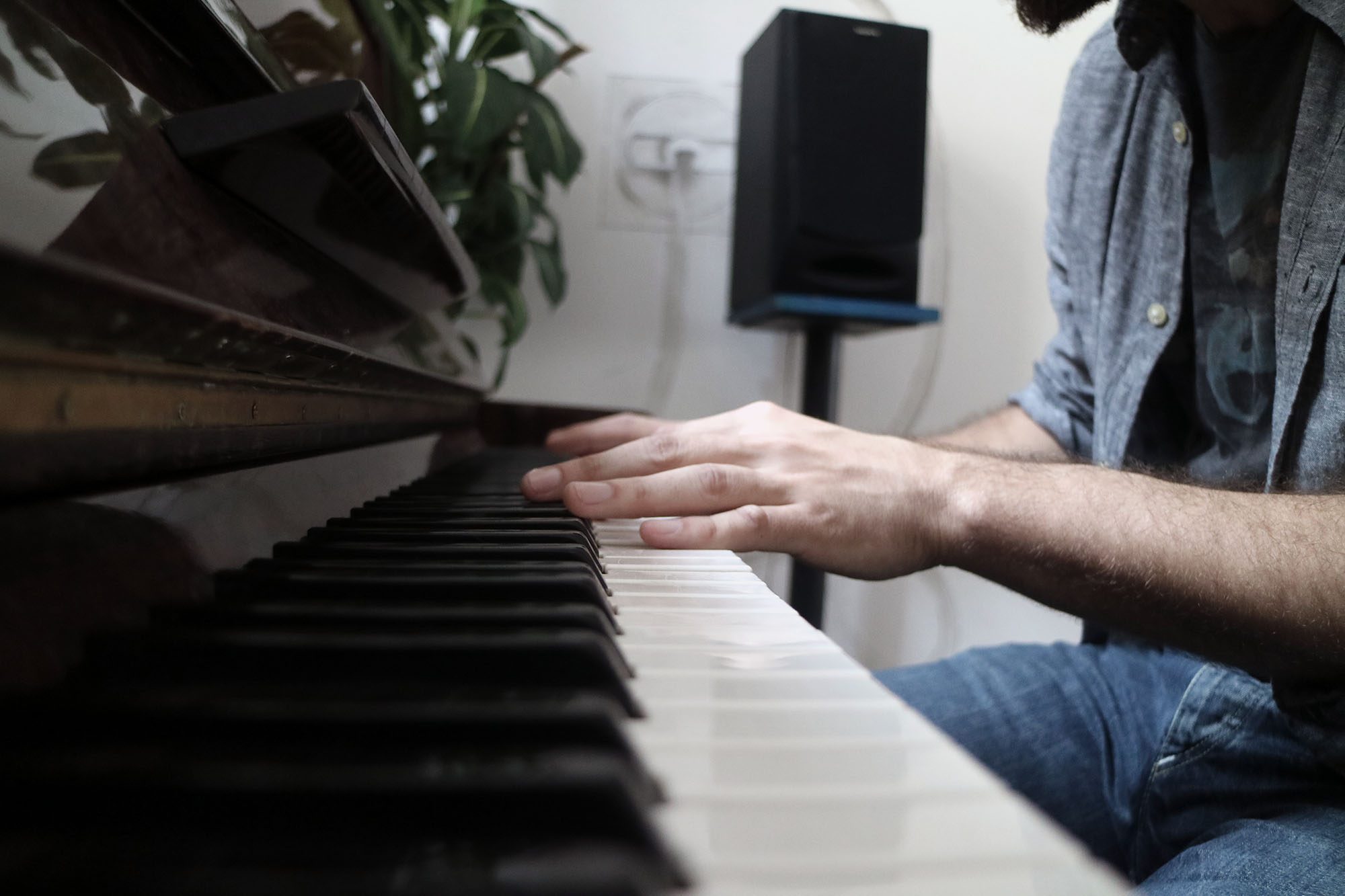 In the very beginning you have a talk with the director. Here, you try your best to understand their vision and start to jot down ideas. After these initial talks you are trusted with a video file. The first “technical” thing to consider when writing film score is whether the film is going to have heavy, gigantic, orchestral score, or is it going to be fairly small and intimate. This will determine how the piece will be put together.
Those with a more intimate feel take very little instrumentation, so they’re a lot quicker to put together. Whereas an orchestral piece has so many parts of it to consider that it takes much longer to put together.

In the beginning I come up with MIDI “mock-ups”. These are basically small versions of each piece of music, without using real performers. The budgets are just too small to do it any other way.

When I first receive the video files for a film, I put them in my program and I try to understand the pacing of the editing. Is it fast-paced? Is it slow? What’s the build up? Where are the emotional cues that I need to follow?

And it’s right here that the problems may arise. If the script is bad, or the actors aren’t professional, or if nobody gives a shit, then there isn’t any emotion in the film.

The director then gives feedback and very often asks for edits. And after that you work closely with the director and keep going backwards and forwards to make sure it fits what he’s searching for.

There have been some scores which I did for three weeks, non-stop. Others take me just a week. I think my record for making a movie score was one day – this took twenty hours of constant work. It was a relatively short and easy project, but I wanted to test myself. I wanted to see how quickly it could be done whilst maintaining a high standard. It was an attempt to see where my limits are.

A day in my life

Let’s say typically I’ll get up at around 8:00am. I’ll take an hour just to clear my head, I’ll drink a cup of coffee, and just think about what I’m doing that day. I usually follow very “office job” hours. I’ll usually work until lunch time, go and make myself some lunch, and watch some shitty YouTube videos just to keep my head out of the creative process. Then after my lunch-break I’ll go right back to it.

At the beginning of a new project, if I can see it’s going well, I tend to take more off time. This just gives me sufficient time to clear my head.

There’s a special feeling. When you’re working on something which is kind of close to you, especially when it’s a creative thing, I tend to find it very difficult to let go and do something else if I’m really in the zone. That means often I actually skip lunch.

“I usually try to keep working until my head starts slowing down.”

You can notice that your concentration starts to get worse and you start to make some really shit mistakes. Or you just start to see that your heart isn’t in it as much while you’re playing. That’s when it’s time to just to take a break and give yourself some fucking rest.

I tend to be far more creative in the evening and at night so I usually use the days to do more technical work. This means doing mixing and orchestral re-harmonising in the morning because my head is a bit clearer and prone to seeing things differently. Then in the evening, after 5:00pm, I become far more creative. I might start working on new cues or bouncing around new ideas. I’ll usually get to sleep around midnight, but sometimes I’ll just keep working until 3:00am.

It depends on my mood and how my mojo is going. If you’re feeling inspired and you’re on a roll, then why stop? Just keep going until you fall asleep or something. 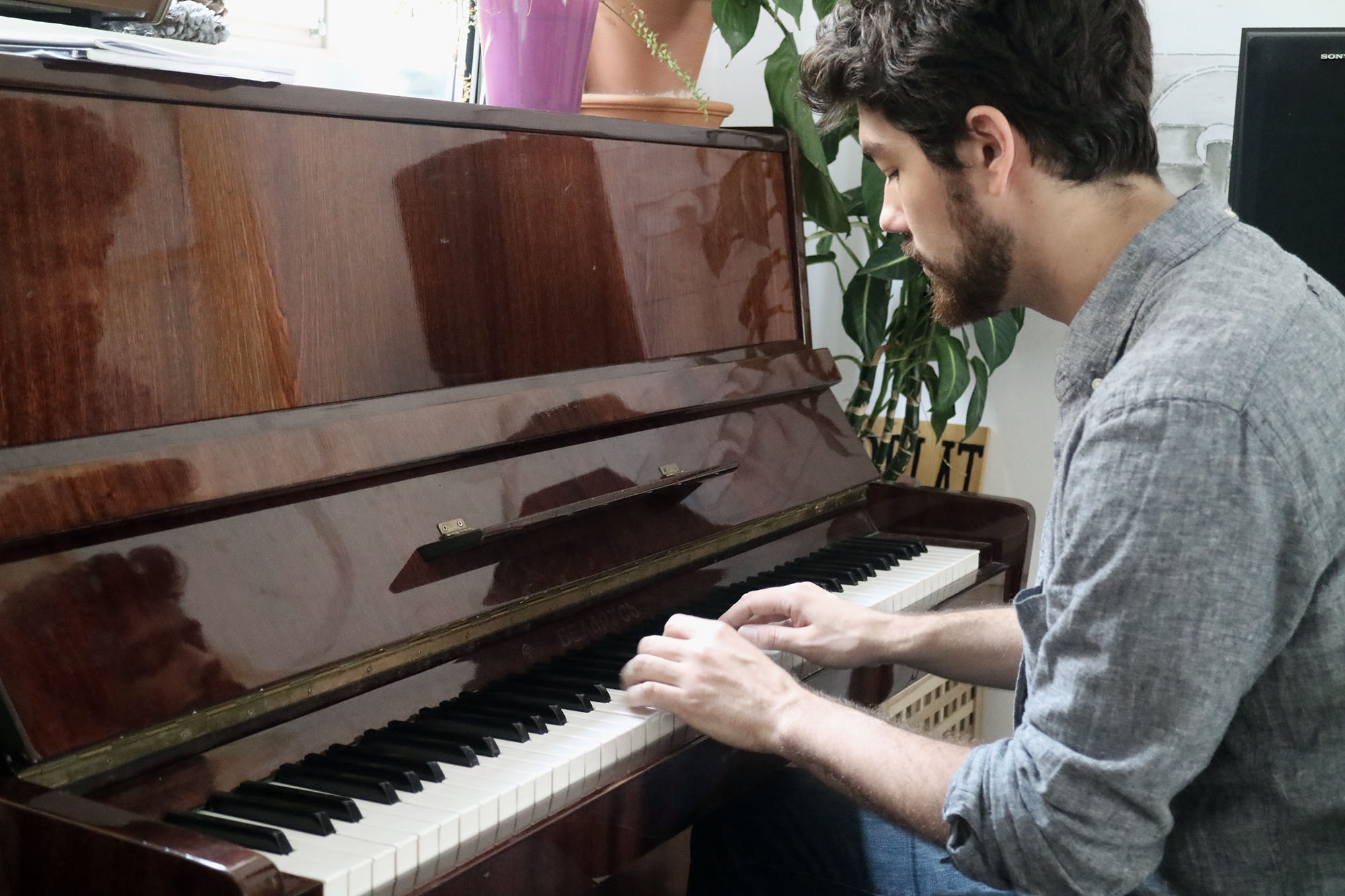 What I love about composing for myself is that you tend to understand yourself a little bit differently. It allows you to notice where your mind goes. I hate knowing things about myself because I think I’m a complex person, I have issues, but the thing is there’s this drive for creativity that I have to pull out.

There are times I remember when I went for a long period of time, perhaps weeks or even months where I didn’t compose anything. Instead I did other stuff, like working on my masters or other non-musical stuff, and I noticed that over time I get considerably more frustrated. Yet as soon as I started composing and arranging things, I felt happy within a matter of seconds. I think this is the main thing with any job, if you find something that makes you happy, and of course it needs to pay the bills too, then do that!

And the worst bit? Sometimes you see the film and it’s absolutely dreadful, yet you still need to do your best for it. So when you get a movie which is very bad at story, very bad at acting, and very bad at technicalities, then you are not going to be able to save it. Your score is going to suck because the pacing for the entire film is off, and it’s just not going to make any sense.

I think this is the biggest downside of my job. There are projects which come your way which you really don’t like, but because you have to make money, you still have to take these projects.

But I honestly feel that if I had to do any 9-5 office job that I didn’t enjoy, then I would actually be fairly unhappy in life. You know that you’ve got to do that for forty fucking years of your life. This is why I think creativeness, at least for me, is inherently satisfying. That means if I can make my money and my living out of something satisfying, then I guess that’s the ultimate goal.