139 – I Was Embarrassed And Ashamed To Be Blind – Ian Treherne 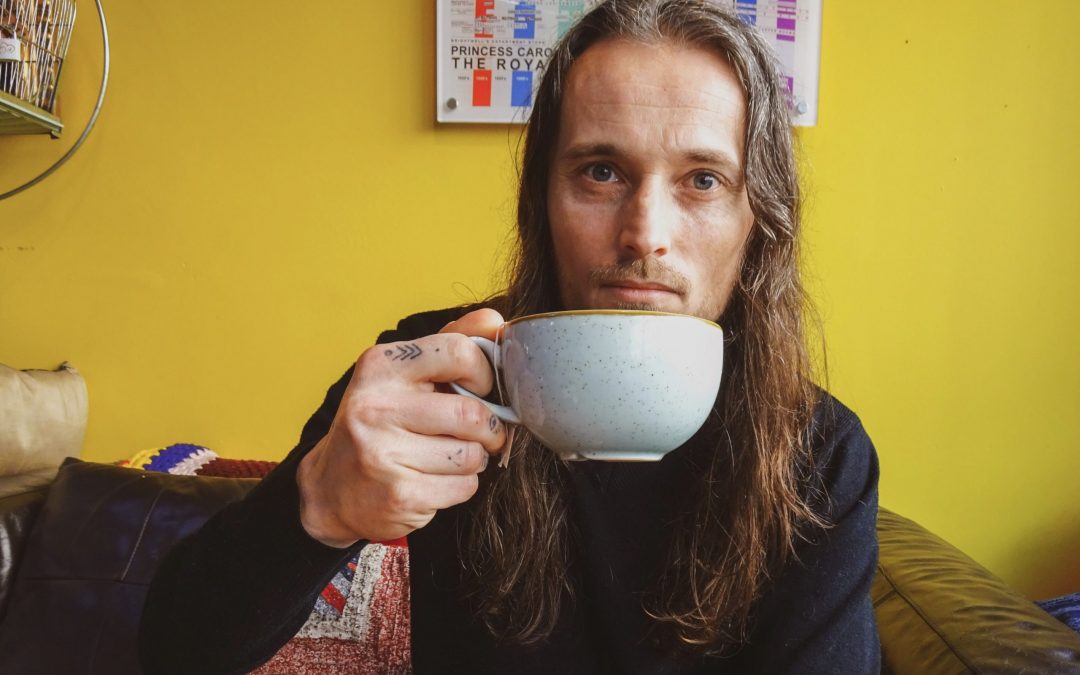 “When I was fifteen I was on my bike in the woods with friends. As soon as the sun went down I kept banging my head and cycling into trees, but my friends could somehow still see where they were going. I literally couldn’t see a thing!

I went to the hospital and they told me I have an eye condition called RP syndrome type 2, which means that my eyesight is deteriorating. It’s a kind of tunnel vision which will get increasingly smaller over time.

I decided to crack on with life and live as normally as possible. For a while I did quite well for myself. I was working, I had a car and a mortgage. I worked in a printing firm, doing the signage for shops and cafes. But I hid my blindness from my employers because I was embarrassed and ashamed.

But in 2012 that all came to an end. My eyes got worse and I had to give up my driver’s licence. I was only 33 and in a short space of time I lost my licence and I lost my job because of the recession. By then, I knew I couldn’t carry on pretending. That was the beginning of my hell. It was the first time I had to enter the “benefits” world…

Up until that point I had been living independently. And suddenly I found myself in the world of benefits. It was one of the reasons I had a breakdown. It nearly killed me.

The benefits system took away any pride I had left. Once I was in the system I had to constantly prove my blindness. I was forced to sell my flat because I wasn’t allowed to own a flat if I was going to get benefits. But, because of the recession I couldn’t sell it and was forced to go bankrupt and have the flat repossessed instead.

In 2015 I really broke down. I stopped getting up, I stopped washing, I stopped eating. I stopped going outside. I isolated myself and became a total recluse. Finally I started thinking about killing myself. I was planning my suicide. I stopped functioning as a human being.

Later that year, I heard the news that a friend of mine had killed herself. To be honest, seeing her death jolted me. It somehow reminded me not to give up, to keep going forward taking one day at a time.

A little after that I got invited onto a British TV programme called “The Undateables”, which shows how people with a range of different and challenging problems participate in the dating world. This opportunity gave me much more confidence to talk about my issues.

I’ve heard the phrase “you don’t look blind” a million times. We’ve been brought up with this old fashioned stereotype of what blindness looks like and it needs modernising. I have discovered the public think that blindness always means zero vision. While this is the case for many in the UK, a survey by RNIB showed that actually 7% have zero vision and 93% have some form of remaining vision. And it’s hard for us to live differently and deal with the constant unnecessary quizzical looks and judgemental stares.

Two years ago I started using the white cane. As soon as the cane comes out people become awkward around you. They don’t know how to react around it. And because they’re awkward, I become awkward. With the cane I begin acting more blind. I find myself looking down more because I want to avoid people’s gazes or staring.

Nowadays I’m a photographer. I’ve always been creative and enjoyed drawing and painting, and I taught myself photography over the past few years. I started doing a lot of shoots in music and art scene here and people saw that I had a lot of passion and enthusiasm for what I’m doing. It just escalated from there, really.

“Even though I’m 95% blind, I think I actually see more than most sighted people. I think a lot of the time sighted people are blind to life. When you have lost sight it makes you a lot more appreciative of what you have got!”