The Masculine Side Of Feminism 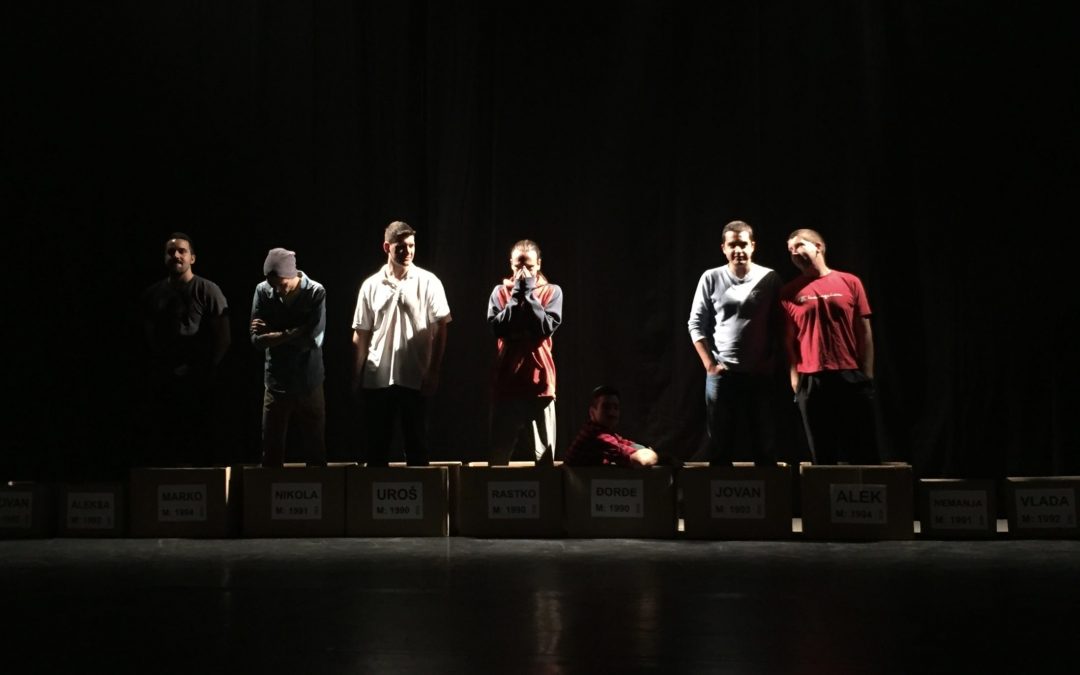 We’ve come a long way since the rigid pre-defined gender expectations we once had, and these changes mean all of us are exploring our gender identities and trying to figure out what it actually means to be a man and a woman.

A lot is said about feminism and the increase in rights, freedom and equality of women, but very little is really being spoken about the other side of the coin: how are men adapting to these new gender roles? While women are freer to be who they want be, men (especially heterosexual men) are on the whole still imprisoned by society’s unhealthy expectations about what masculinity is.

Shortly after I arrived in Serbia I discovered a project called Young Men’s Initiative which has the ambition of promoting a healthier masculinity in the Balkans. One of the core components of this project is a play called Macho Man which opens a conversation about the difficulties and pressures men face today. The play began seven years ago with an open-casting to find men from all over Serbia. Uroš, one of the actors in the play, told me: “Seven of us were chosen from the casting and we brought together in a house in Novi Sad. We were essentially all strangers, and in some way that made it easier to open up. We began sharing our stories and experiences of growing up as a man in Serbia. The whole performance shares the troubles we faced growing up as young men in the Balkans.”

I was invited to see the play… but it was in Serbian! To my rescue came my “chaperone” armed with a computer on her lap. We sat next to each other on the front row of the small theatre and she diligently clicked through the English subtitles in real-time as we watched the performance. 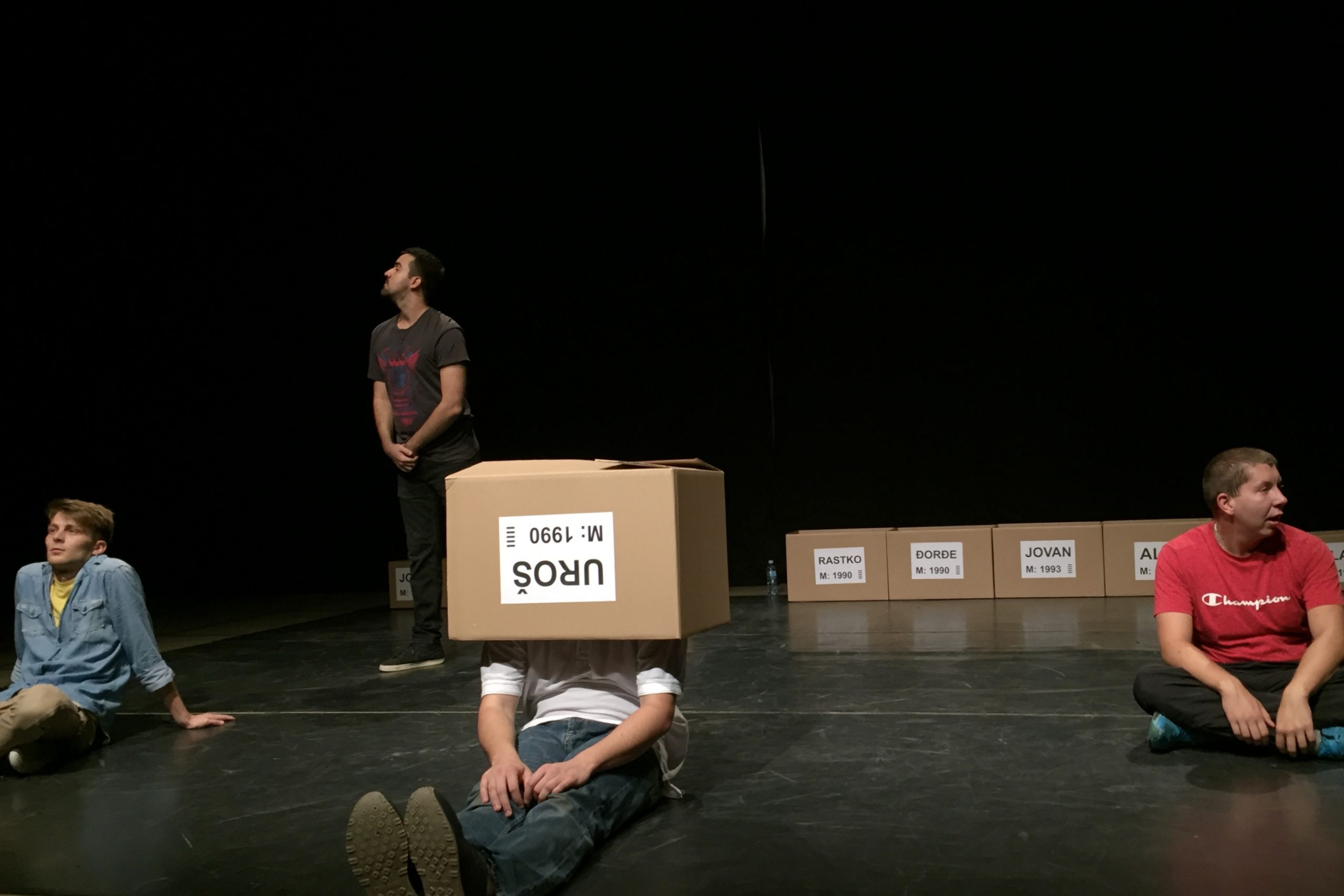 The play began with six ordinary men discussing what made them “real men”. The need to be strong and not express emotions; the need to be aggressive or violent to show you’re not a “pussy”; the expectations to be brave, courageous and strong. The play mixes humour, music and thoughtful dialogue to question these expectations and it forces you to think about how unhealthy (not to mention nonsensical) most of them are. It also touches on recent history in Serbia where these macho expectations are probably exacerbated from the Yugoslavian wars of the 90s and the transition from socialism to capitalism.

But the play’s message is relevant beyond Serbia’s borders, too. Another group member, Marko, tells me: “We’ve performed the show across Europe and everywhere we go people tell us that they are experiencing the same pressure. It’s a universal story! We’re discussing the things that all men are experiencing, but we hardly talk to each other about.”

Most of us prefer to fit in than to be truly honest with ourselves.

He followed with a poignant question: “How can we expect real change if we continue to traumatise ourselves trying to meet society’s expectations?” He shared with me his motivation for being a part of Macho Man: “I’m not optimistic about the future, but that makes me want to work even harder to help change it. I’m trying my best to change things. Not just through the play but also through speaking with people, through everyday life, through my studies in the medical profession, through everything I do! I feel it’s my responsibility. Everyone should have the same rights. Men shouldn’t be put in a box where they can’t express their feelings. They don’t have to be like the violent fathers they may have experienced and they don’t have to be hooligans or savages!” 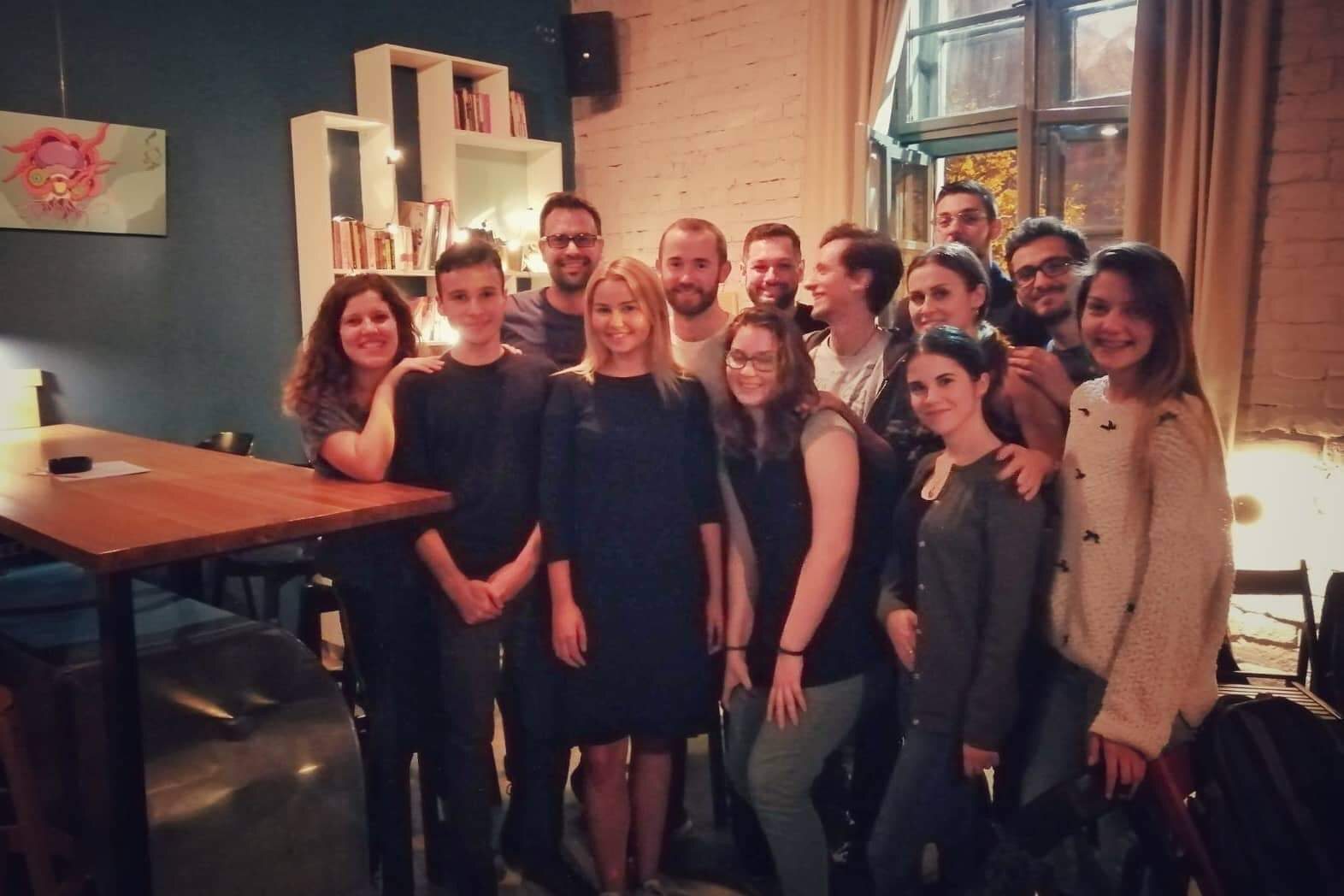 I was invited to join a meeting with the Young Men’s Initiative (and other local organisations). I sat at a table of fourteen young people all nervously wondering why they’d been joined by some random British guy. And I was given centre stage for twenty minutes to host a discussion about life in Serbia. “Life as a millennial in Serbia is pretty frustrating,” one of them began. “We were raised by a generation who were under communism. They feel quite lost in today’s capitalist world, and we’re trying to make sense of it too. I want to earn and be independent and live a comfortable life. But the only real way for me to do that is by doing a job I don’t like. Usually the things you like aren’t paid enough. Even if you do decide to live a simple life with a job you like, you’re never truly comfortable in case something goes wrong. The “worst case scenario” is always on your mind so you’re neither wealthy nor happy.”

This feels true of life in England and I imagine much of the Western world, although sometimes we’re so entrenched in this life that we’re unaware that there is an alternative.

Since I was there to learn about the Young Men’s Initiative, I wanted to find out what environment they’d grown up in which bred such an initiative in the first place.

“During our socialist past men and women participated in the labour market equally, but it was totally different once they were behind closed doors at home. I think we’re experiencing the consequences of that,” one of them told me. But what does that look like today? “You still have to be a man to play a dominant role in this society. That’s a goal of the Young Men Initiative – to deconstruct this experience. Since there’s such a rigid role of what a man is, the same is true for being a woman.

The gender roles are complementary and a woman is supposed to be the exact opposite of what a man is.

One of the young men in the group told me about the work he’s doing as a social worker; often working with “skinheads” or other ultra-masculine men.

“You have to be really courageous to step out of that system. One of the brightest moments in the work I do is helping young people to understand that they can be something else – not just the person their parents and society imprinted on them.” As we finished, he spoke of the doubts he has about spending his time in Serbia fighting for these positive changes. “It makes me wonder if I’ll have the opportunity to live the life I want here in Serbia during my lifetime. Or whether I have to go elsewhere in order to do that.”

So much can be achieved if we have the courage to be vulnerable with one another about how we truly feel; when we can look beyond the norms that society and experience has imprinted on us and examine our lives and beliefs for ourselves. At How To Be Human, we’ve built a community which exists as a safe place to open up and discuss our human existence with others. Join us to become part of that conversation.